We are located on Pacific Blvd. right before the overpass going into downtown Albany. Centrally located in the beautiful town of Albany, Oregon.

Our dining is on a first come, first served basis. However, if you have a large party, are planning an event, or have a group meeting , give us a call and we would be happy to accommodate you. 541-926-5755.

Thank you for contacting us! If needed, you will hear back within 48-72 hours.

The predecessor to Pop’s Branding Iron Restaurant was first called Scotty’s Inn and then Pop’s Cafe. It was a landmark for travelers on old Highway 99E, now Pacific Boulevard. Pop Uken was well known as a breeder of race horses. When the horses weren’t running, you could find him at the end of the Pop’s Cafe counter, always ready to spin a yarn about racing events. Walls of the cafe were covered with pictures of horses and ribbons of past victories. Albany’s largest plywood mill, which represented the city’s biggest payroll, was located next door until it burned in the late 1950s. Pop’s Cafe was purchased in 1964 and has been in the family ever since. The current Pop’s Branding Iron was built in 1966 and includes seating for 100, a banquet room that seats 70 and the Saloon.​ 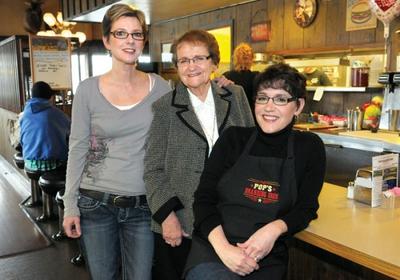